Under the Boardwalk Down by the Sea 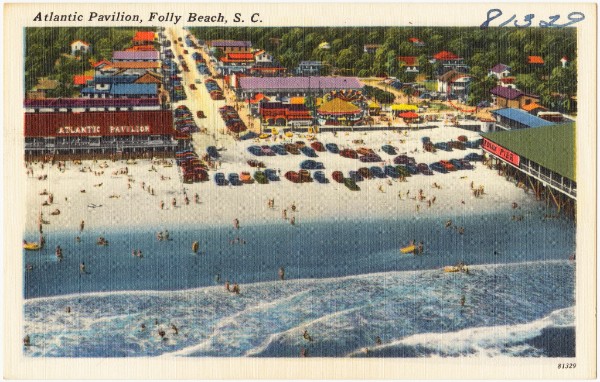 Y'all, Lois just assisted a client buy the most adorable set of cottages out on Folly Beach, and they came with the legend that Elvis had eaten there when it was a briefly a restaurant (!). Now, we've not been able to confirm this--there were (and still are!) Elvis sightings everywhere--but we did learn an awful lot about music on Folly in its heyday. If you're not from around here and you hear people above a certain age talking about dancing on Folly's Pier, don't make the assumption they're talking about the Edwin S. Taylor Fishing Pier that juts out into the ocean now. Folly Beach has a long history of piers and pavilions and dancing and music...let's check it out!

Folly's Pier and Pavilion area opened in June, 1931 and was initially known as the Atlantic Boardwalk. An estimated 800 people turned out for the opening ceremonies, where Charleston Mayor Thomas P. Stoney was the guest speaker and the Marshall Van Poole Orchestra played that night. The Pavilion was built out over the beach to the right at the end of Center Street. It was a large open-air building with with grills and a soda shop, various other concessions, and a large seating area as well as game arcades. It also provided bath houses where people could shower and change after leaving the beach. The boardwalk was made of wide wooden planks, and there were wooden ramps next to the pavilion that cars used to cross the soft sand of the dunes to get to the hard sand on the beach. (If you're wondering if cars ever got stuck by the incoming tide, the answer is a resounding YES.) 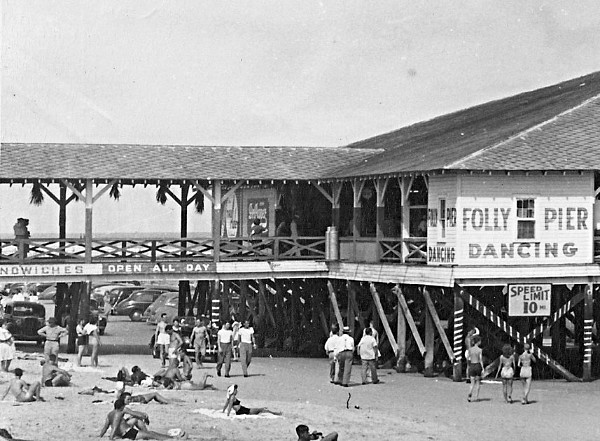 Across Center Street from the Pavilion was the seasonal carnival that was set up each spring and dismantled every fall with a sign that read: "Welcome to Folly's Playground." It covered about a block and included swings, merry-go-rounds, a Ferris wheel, as well as a Whip--and ice cream stands and snowballs and cotton candy. There was a bowling alley and a skating rink, bars and restaurants--a summer vacation paradise for thousands of visitors! A wooden boardwalk carried people from the amusement park onto the famous Folly Pier. Now, there were a lot of bars with juke joints clustered along Center Street and the oceanfront, but none of them rivalled the Pier when it came to dancing. And the music! Well before Myrtle Beach had established itself, Folly Beach was where all the big names came.

Folly's Pier was built primarily with palmetto logs, 120 feet wide and 97 feet long, painted bright green and white. Big band orchestras like Glenn Miller's and Maurice William's bands played while well-dressed dancers twirled beneath a revolving crystal ball. It was all very civilized and a dance committee made sure unaccompanied females had someone to dance with. On July 4th in 1937, over 15,000 people were at the pier and it's a wonder it didn't topple into the ocean! The Ink Spots sang their early If I Didn't Care and Guy Lombardo and the Royal Canadians played " the sweetest music this side of heaven" right here on Folly's Pier. Swing music, jazz, crooners--they were all here. Tommy and Jimmy Dorsey, Benny Goodman, Count Basie, Jimmy Vale. Fats Domino brought in more than 4,000 fans but a young Connie Francis sold few tickets. That's okay, Connie Francis. Who's sorry now, right? 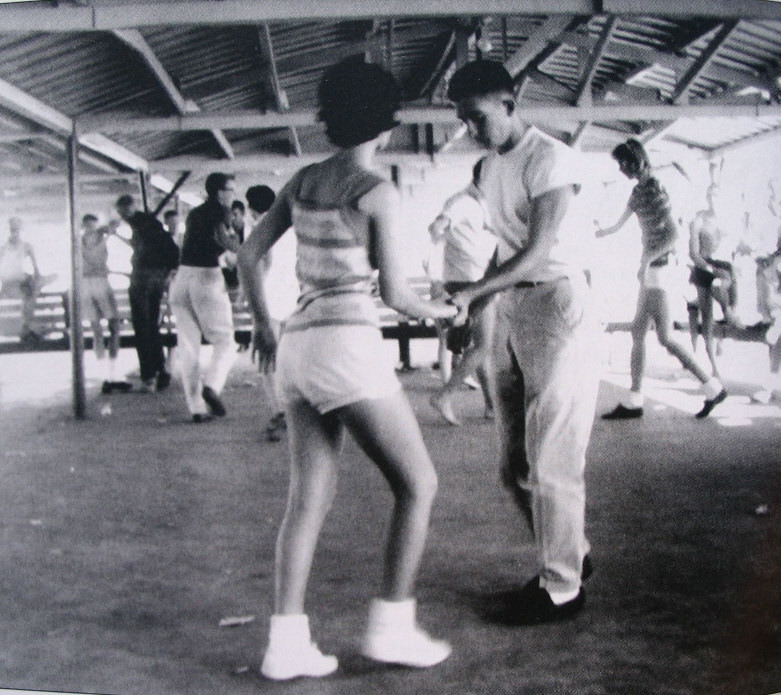 Teenagers dancing at The Hang Out in Panama City Beach, FL.

In April, 1957, the Pavilion and the Ocean Front Hotel beside it burned down. Kokomo's Lounge and Joe's Restaurant also went up in flames, which could be seen from downtown Charleston. Initial reports that the fire was caused by a plane crash proved to be false and thankfully, no one was injured. Three years later, a new grand pavilion and renovated pier was opened during a three-day grand opening celebration that included High Wire Acts and Dean Hudson and his Orchestra on the Pier. All the state and local dignitaries were present for the unveiling of the new Ocean Plaza: 1,700 ft of concrete boardwalk, a bathhouse, souvenir shop, four food concessions, 15 amusement rides, 12 game concessions, raft concessions, and a skate rink upstairs. Who remembers the tilt-a-whirl and the bumper cars?

And the bands play on

From the late '50s and into the '60s, Folly's Pier featured R&B, soul, doo-wop, rock & roll, and (of course) beach music. Y'all, just about everyone from that era that you can think of played here (we can't list them all, but you get the idea): The Tams, The Temptations, Maurice Williams & the Zodiacs, The Drifters, Jerry Lee Lewis and even Otis Redding! Regional groups like Doug Clark and the Hot Nuts and the Catalinas were always a big hit on the pier. As the music changes, so did the dress code and the dance steps: the elegant dresses and high heels gave way to bobby socks and poodle skirts, then to sandals and short-shorts. Suited gentlemen gave way to James Dean's look of tight white t-shirt and jeans and then barefoot and no shirt. And the dances--the two-step, polka, waltz, jitterbug, shag, bop, twist, monkey, dog, monster mash--they were all done on those old, creosote-soaked wood floors with the water swishing around the pilings below. How many romantic, how many wild and crazy nights were had? 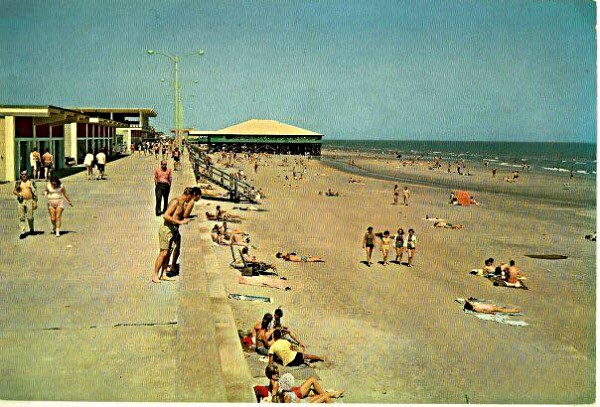 Folly's Pier really was one the 'swingingest' place on the whole east coast in the late '30s, '40s, and 50s. Towards the end of the 1960s, things began to thin out. The early accretion from the installation of the harbor jetties had reversed and Folly was losing sand at a high rate. Cars were no longer allowed on the beach (and palm reading was outlawed, too, in case you were wondering). In the early 1960s, a fishing pier was built alongside and beyond the dancing pier, but eventually the carnival rides were packed up for good. Over time, bands played less and less frequently, and the Pier was used for community events and holiday activities. As other beaches grew in popularity, fewer and fewer visitors were coming to Folly Beach.

The end of an era

In January, 1977, the pier caught fire and was almost totally destroyed. There were rumors of arson, that the fire had been purposely set, but no one was ever prosecuted. By some accounts, vagrants lit fires on the pier that night to try to stay warm; others say a man set it ablaze for his lady-friend, who happened to like watching things burn. Thankfully, no one got hurt. But it was the end of an era for Folly Beach. In 1985, the nine-story Holiday Inn was built on the beachfront on the site of the old pavilion and in 1995, the Edwin S. Taylor Pier was built a lot higher and a lot longer than the original (it's over 1,000 ft long). Part of the Charleston County Parks and Recreation Department, the pier is a great spot for fishing, strolling, and enjoying the sea breeze. Were you wishing you could dance on the Pier now? Fret not! Moonlight Mixers are held about once a month for those who want to shag under the stars (that's Carolina shagging, not British shagging!). The next one is in a couple weeks--May 27th. Who's going to be there? 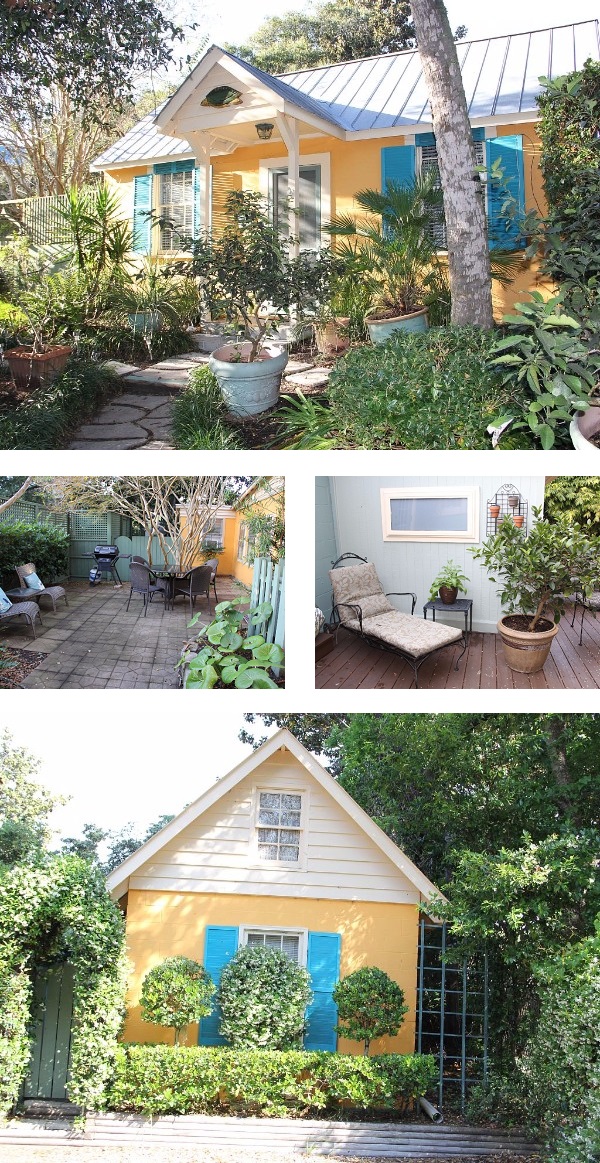 Big Turtle Cottage (above) and Little Turtle Guest Cottage (below) on Folly Beach are available as vacation rentals through their new owner.

Folly Beach has always been the 'funkiest' of our local beaches and even though it went through a 'quiet' phase, the laidback Edge of America has never lost that special nowhere-else-on-Earth quality. The last ten to fifteen years has seen a boom in business on Folly Beach, with an eclectic mix of bars, restaurants, and shops. Only a mere 10 miles from downtown, doesn't it feel like a world away? Wouldn't you like a little weekend getaway so close to home? Or, perhaps you have friends coming to visit who want to stay at the beach?

Lois's client is thrilled to offer these darling Folly cottages as vacation rentals, and since they've just gone live on VRBO, you actually have a chance of booking the dates you want!

Although on the same property, these two units have been designed to ensure absolute privacy with separate entrances, parking, and outdoor patios. But if you're thinking of traveling with family or friends, renting both units would be a great option. The Big Turtle Cottage sleeps four and the Little Turtle Guest Cottage sleeps two. With old growth natural flora, the setting is divine! Click on the links to see the full listings on VRBO and go ahead and book your stay before the calendar fills up--we promise, you will love it!