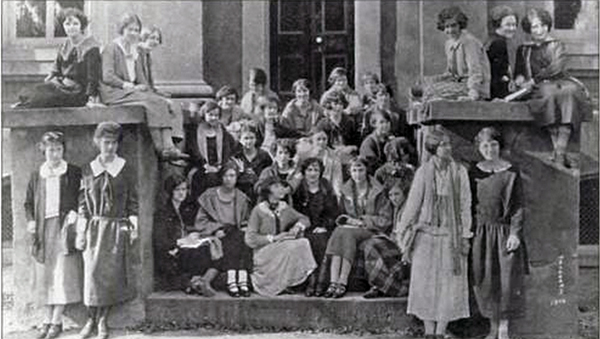 This week marks the 95th anniversary of the ratification of the 19th amendment, granting women the right to vote. This was due, in part, to the actions of Charleston's Anita Pollitzer, who helped tip Tennessee over the line to get two-thirds of the states' vote necessary for ratification. But a couple of years before that, her eldest sister Carrie Pollitzer spearheaded a change in Charleston that these days we tend to take for granted. Watching young co-eds moving in this weekend as another semester begins at the College of Charleston, let's reflect on how young women have come a long way, baby.

During the 18th century, wealthy Charleston families sent their cons abroad or up north for education, but several prominent Charlestonians decided to create the first educational institution south of Virginia. The College of Charleston (locally, the College), was founded in 1770, chartered in 1785, and began instruction in 1790. It's early years are characterized by scarce funds and few students, according to College of Charleston Voices: Campus and Community Through the Centuries, edited by Katherine E. Chaddock and Carolyn B. Matalene. (This is a treasure trove of letters, diaries, memoirs, newspapers, magazines -- great insight to the evolution of an institution.) In 1837, the City of Charleston agreed to contribute financial support to keep the school going, making the College the oldest municipal college in the country; it remained a municipal college for more than a century. The City provided funds in the mid-1800s to enlarge the main building (now called Randolph Hall), to construct Porter's Lodge, and to fence in the Cistern Yard. But over the second half of that century, the College withstood the Civil War, Reconstruction, several financial crises and natural disasters. According to the College website, things started turning around when 26-year old Harris Randolph came on the scene in 1897 (he was to preside over the school for nearly fifty years). President Randolph secured endowments, created scholarships, built dormitories and increased enrollment -- but he did not -- repeat, did not -- want women on campus. 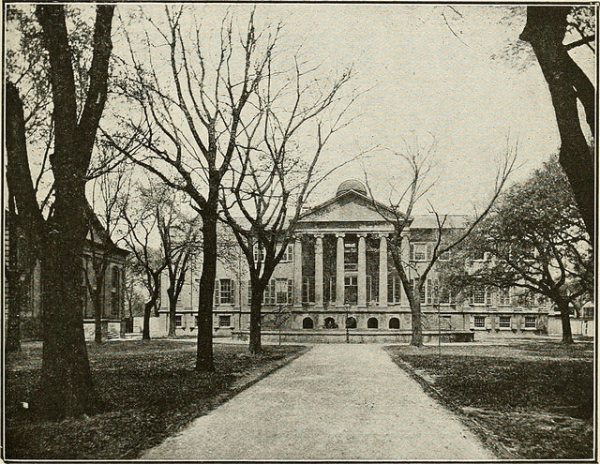 Sometimes, it takes a war...

Meanwhile, in Columbia, lagging enrollment and the absence of a liberal arts school for women prompted the State legislature to pass a bill in 1893 mandating the South Carolina College (now University of South Carolina) to admit women; two year later, they did. Yay! Five years later, the men at the College of Charleston began promoting co-education in an editorial in the College of Charleston Magazine (December, 1898):

The good results in the social life of any country, to be obtained by offering to its women a college education of as high a grade and as easy of attainment as that enjoyed by their brothers, cannot be overestimated. A high education cannot but be beneficial to anybody, where man or woman...When the importance of adopting this system of co-education is universally recognized and acted upon, and no college of university refuses to welcome to its halls the fair “co-ed” then will the influence of the college as a factor in our social system be greatly increased and its own private character be vastly improved.

Smart boys, but it seems that plea fell on deaf ears for another twenty years. Articles from the local newspapers in the first two decades of the 20th century describe the perceived dangers of admitting women to the College: there were concerns that the endowments (for the “education of young men”) would be revoked, that there were no funds to develop facilities or programs for females, and that the College would end up becoming a girl’s school (oops!).

But the City Federation of Women's Clubs, with Miss Carrie Pollitzer at the helm, pressed on. Finally, a letter of acquiescence from President Randolph was issued in July, 1918 (recall that the United States entered World War I in April of the previous year):

In acknowledging [your] petition I undertook to explain to the ladies of your committee many difficulties which stood in the way of carrying out a program which, in effect, meant a coordinate college for women be organized...But since April, 1917, there has come about a total change of circumstances. Our country is at war...women on all sides are called upon for work of a sort that has not been open to them before and face everywhere a future full of uncertainty. I should not feel that I was doing all that it was given to me to do at this time of national crisis if I permitted to be left unconsidered any plan to provide for the women of Charleston the higher training which they will more than ever need for the increasing demands being placed on them...

For twenty-one years I have opposed coeducation of the College...I am still of the opinion that it would be wiser to work and wait for the more certain methods of separate training for young women and young men...But no one can fail to be profoundly impressed by the conditions which women now have to face; and therefore with the consent and approval of the trustees of the College...allow me to suggest a conference between a committee of the College faculty and a committee of the City Federation of Women’s Clubs... 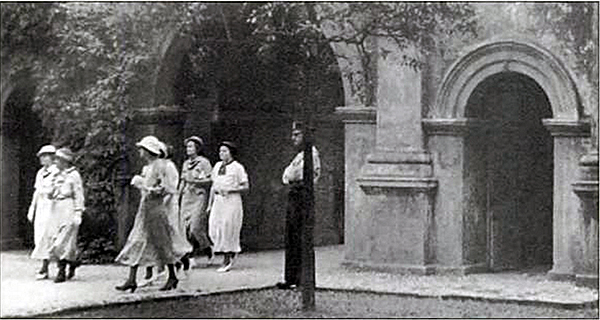 So while President Randolph conceded, his agreement came with strings attached. If the young women wanted to obtain an education at the College, they would have to raise some money to pay for a ladies lounge as well as a chaperon to watch over them. Perhaps this was meant to intimidate the women and put an end to their efforts; in any event, this is what Miss Carrie Pollitzer said about the efforts in a later interview:

Harrison Randolph was young and wonderful. But he was all about academic things. First he told me the alumni, the board, and so forth of the College would all have to acquiesce [to admitting women]. Then, after an unending number of letters and replies, they finally said a number of changes would have to be made and it would cost $1,200. We decided the Charleston Federation of Women’s Clubs would raise that money. We had our first [fundraising] meeting at the Chamber of Commerce. No women had ever been to the Chamber of Commerce; that was holy ground for the men. I gave a little address, and we had a remarkable group of women there. After that we went to houses for money, door to door to get donations. Oh, it was hot out there that summer. That fall, women entered. The reason they were so few was because nobody knew until the last minute that women could be admitted. 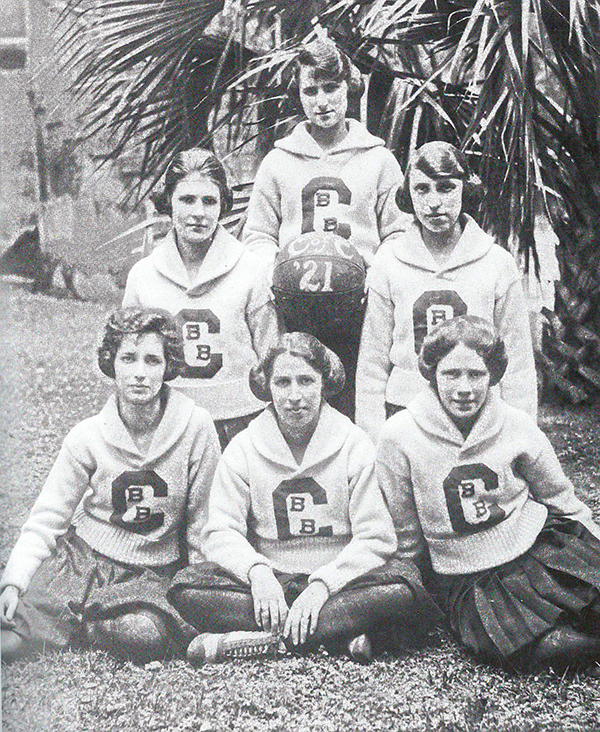 Thirteen women enrolled at the College that fall, including Charleston's beloved writer Josephine Pinckney (Three O'Clock Dinner) but only one graduated four years later, Pierrine Smith Boyd, class of 1922, magna cum laude. Three of the "Original 13" attended a 50-year reunion luncheon, according to an article in the Evening Post from May 15, 1972. They spoke of Miss Gibbs, the chaperon, who went with them everywhere -- to the library or to their 'special room up on the third floor' -- except for classes. Apparently, the men did not accept them as students at first, but had no problem dating them. The ladies were well into the swing of things by the second year, when they organized a girl's basketball team. They played half-court and wore blouses, cloomers, and black stockings so no leg showed. According to College of Charleston: The College History Series by Iliana Strauch and Katina Strauch, "From the beginning, female educators were concerned that athletics would 'unsex' girls and make them unfit for their proper role in life, which was to elevate the moral level of society. Women's sports were modified to promote teamwork and make them less like men's sports with the aggressive competition. To this end, players could not hold the ball for more than three seconds or dribble more than three times." By the looks of today's Lady Cougars, these sentiments are no longer in play!

In an office where everyone (save one) has attended or taught classes at the College, we’ve definitely put in our time hanging out at the Cistern, but we didn’t have a special name for it--or a formal purpose (that we’d admit to, anyway). You have to love the sense of humor of the 1922 co-eds, for whom hanging out at the Cistern to meet boys was called “cisternating.” On their page in the yearbook Comet, they call themselves “The Cistern Sisters”. Motto: “Seize every passing ‘opportunity’.” Colors: Natural or otherwise. Mascot: “Sister” Nelson. Object: M.R.S. degree. Their talents included Expert Campus Decorators, Beguilers of the Day, and Keen Class Cutters. By all accounts, young women at the College are not there to pursue M.R.S. degrees these days, but class cutters will surely always be around. In the 1930 Comet, the old-timer janitor “Honorable Robert” said of female students, “We didn’t want them here in the first place, but they sneaked them into the school when President Randolph was in Washington during the war, and we just ain’t been able to get rid of them since.” Nope, Robert, we’re here to stay!