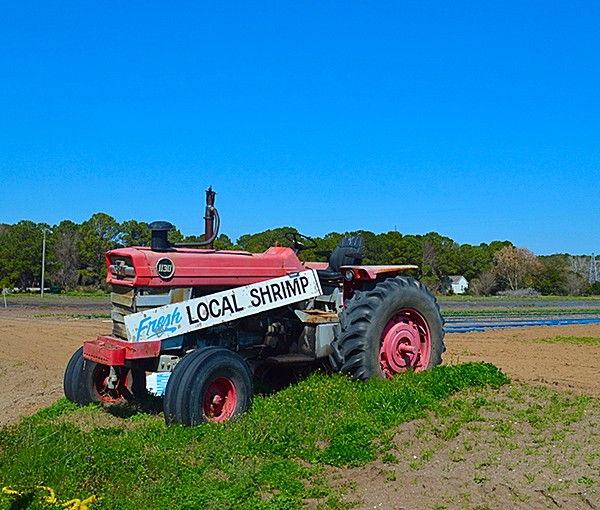 Y'all having shrimps for supper?

Shrimp baiting season just opened, and those of you in the know have probably already started stocking your freezer. For those of you who aren’t, let’s get you up to speed on the history, traditions, and protocols of shrimping in the Lowcountry. Because one thing’s for sure: Carolina has a second crop of white gold--you know, the fruit of the sea.

South Carolina has three species of shrimp--brown, white, and pink (although pink is less common). They all pretty much taste the same, but the white tend to be a bit larger in size. In the spring, there’s a short window where we can get large roe-shrimp, the white shrimp that have just spawned. During the summer, brown shrimp; fall comes the white shrimp--and the 60-day recreational shrimp baiting season. Now, that’s when all the action heats up. But first let’s visit the shrimping of days gone by. 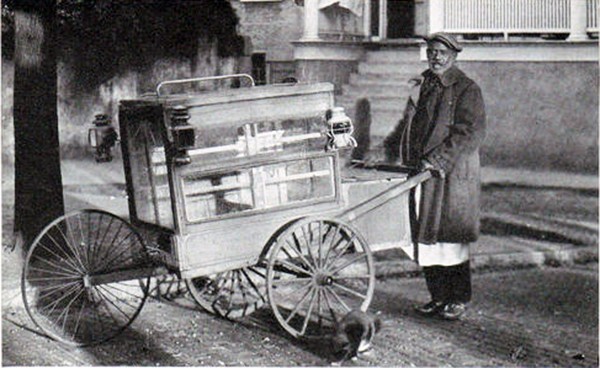 The fishermen who are engaged in taking shrimp are a thrifty set of night workers. Their sole possession in the way of stock in trade consists of a “dug-out” canoe and a cast-net. They start out on the last of the ebb or first of the flood tide, and follow the “run" of the shrimp up either bank of the river which may happen to be the leeward bank. The shrimp generally resort to the marsh shores to feed, and it is here that they are taken. One man paddles the canoe and another casts the net. About four hours’ work generally suffices to fill the boat, and by daybreak the nocturnal fishermen return to the city.

The general landing place is Moreland’s Wharf [at the foot of King Street], on South Bay, and by daybreak the crowds of hawkers are promptly on hand...The shrimp men dare not land at the wharf for fear of being torn limb from limb by the crowd of hawkers, each one of whom is endeavoring to get out first in the street with his tray. Amid the cursing, swearing, haggling and pushing of the crowd it is impossible to hear a word, and an ordinary mortal would be distracted.

But the old shrimp catcher is up to snuff, and very rarely taken in by the crowd. He anchors his boat a few yards from the wharf, and proceeds deliberately to gather up and measure out his shrimp, looking all the while as if a sale was the last thing in the world he desired. This adds fuel to the flame of excitement that is raging on the wharf, and while the crowd are swearing and howling and jabbering to the best of their ability, [one man], who perhaps has been longer in the business than any of them, quietly edges his way to the head of the pier, makes an offer “sotto voce” to the boatsman, which is taken, and in a few moments startles his less wary competitors by crying out in stentorian tones, under their very noses, “Raw Shrimp,” and he goes on his way rejoicing.

Here is a snippet of the shrimp vendor’s song from Street Cries of an Old Southern City (1910) by Harriette Kershaw Leiding, John’s great-great aunt. Who here can read musical notation 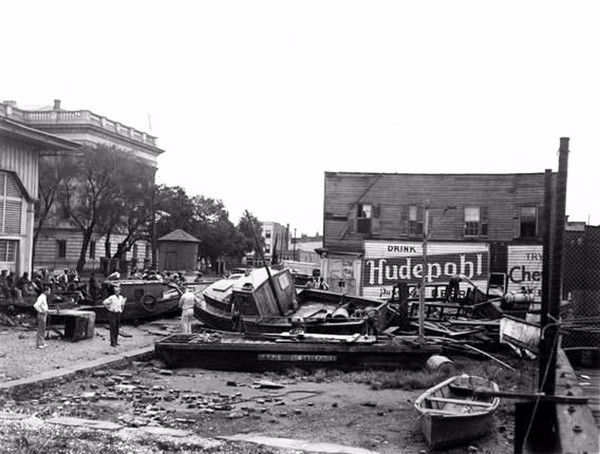 A Change of Tides

The Mosquito Fleet once had fifty boats and a hundred fisherman; they had colorful races in the harbor on the 4th of July that gathered throngs of spectators. But the flotilla immortalized in DuBose Heyward’s 1925 novel Porgy and later by the musical Porgy and Bess diminished after a series of storms in the early 1900s and was nearly wiped out after the hurricane of 1940. By the early 1960s, few fisherman remained as their slips at Fisherman’s Wharf filled with silt and docks and boats were left in disrepair. The Mosquito Fleet, alas, buzzed no more.

Commercial trawlers came to Charleston in the 1920s. Of course, local recreational fishermen had been throwing their cast nets to put shrimp on their own tables since forever. But from time to time, recreational fishermen discovered the means to increase their catch to the point of angering commercial fishermen--especially when these large hauls were sold illegally on the side of the road well below market price. Over the years, there were heated arguments about such things as ‘try-nets’ and butterfly nets, but nothing in the recreational shrimping world caused as much commotion as shrimp baiting. 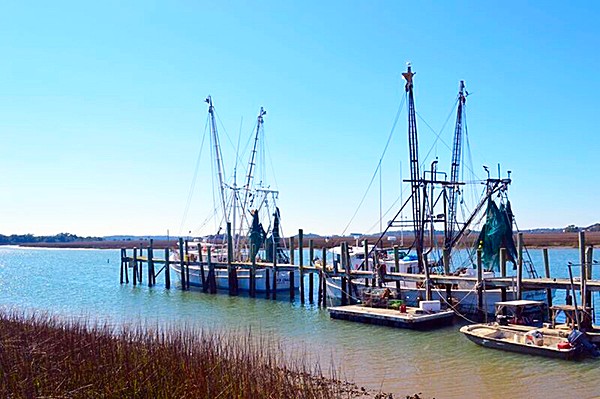 Commercial-size catches by people casting for shrimp had not been thought possible until a couple of brothers from Florida moved into the Beaufort area and began an inshore commercial castnetting operation over baited areas that stunned wildlife officers; at the time, there was no law prohibiting such an operation. Captain Ed McTeer, from the Wildlife and Marine Resources Department, said that the methodology utilized was so effective the Florida brothers were catching 400 to 500 pounds of shrimp per night. According to a September 14, 1986 Post & Courier article, from that one-boat operation near Beaufort, the practice had spread up the coast with 15-20 boats the next year and had reached almost epidemic proportions after that: one report noted seeing 147 boats casting over bait in the Charleston Harbor one night, from the Yorktown to the Navy Base.

It didn’t take long for things to get out of hand, as shrimpers tried to “stake their claim” and intimidate other shrimpers. In shrimp baiting, shrimpers set out a series of poles to make where they drop bait balls, made of fish meal and clay meant to attract shrimp, and then cast their nets around the poles. Some of the shrimpers didn’t bother to remove their poles after a night of casting, returning night after night to the same area, claiming it as “their” shrimping spot. There were many reports of threats issued over people infringing on someone’s “staked claim;” concern for the potential for violence grew, and no wonder. 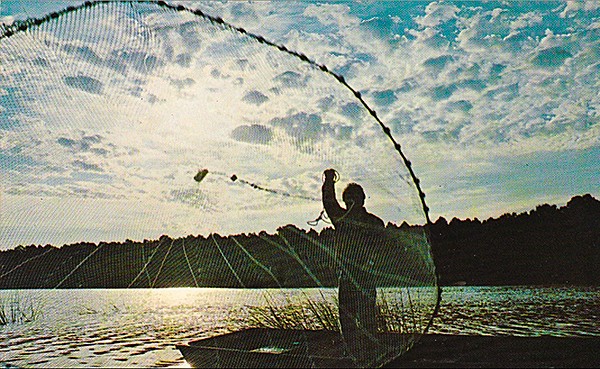 According to a series of articles in the Post & Courier in 1986, that fall was an especially hairy time. Not only were shrimpers being verbally threatened, guns were being drawn. Right here in the harbor! One case was brought before the Magistrate when a man allegedly cast his net too close to an area baited by other men; when the men allegedly menaced him with their boat, he drew a gun on them. “The river is so filled with marker poles now that no one can even cast without being close to one of the baited areas,” the judge said. In another incident, a cast netter had an anchor thrown into his boat by other fishermen. He was then towed into the middle of the river and told, under a threat of physical harm, not to come back. The cheek!

Get your net ready!

These days, you can pretty much plan on casting your net over bait without the threat of a shrimp war. According to Ben Moise’s Ramblings of a Lowcountry Game Warden (be careful-- reading this book will make you want to become a game warden!), numerous regulations and stiff penalties have been enacted to keep the practice civil and fair. Each boat can have only ten poles with maximum distances of bait-pole sets as well as distances the shrimp baiters had to stay away from each other. Recreational shrimp baiting is well-established and properly controlled in Charleston now, and it’s a great way to spent some fall nights on the water in order to fill your freezer for the winter. Oh, and speaking of shrimp, if y’all haven’t ever been to the Beaufort Shrimp Festival--it’s coming up on October 2 & 3 and well worth the beautiful 1.5 - 2 hour drive down the coast to get there, especially if you think you can win the shrimp-heading contest! 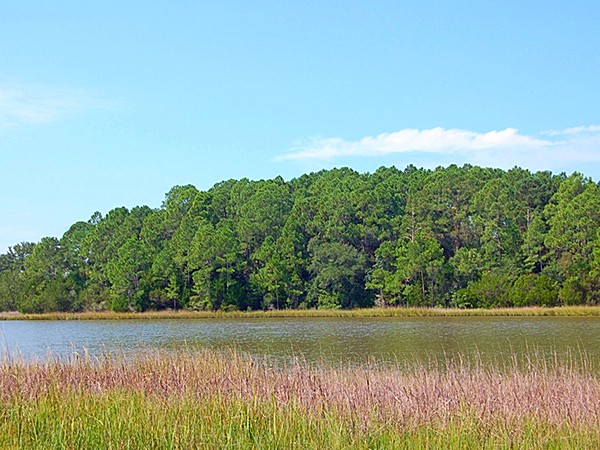 Beagle Club Road is listed for sale with John Payne

Perfect Spot for Casting a Net

Did you know that property owners can bait for shrimp right off their dock, or cast over bait from the edge of the marsh? John has a couple of pristine lots listed for sale out on Yonge’s Island on Flounder Lake that would be just perfect for casting a net. Give him a call at 843-708-0897 to see this gorgeous waterfront property...and he might even give you a lesson in casting a net! Check out this property and our other listings here. 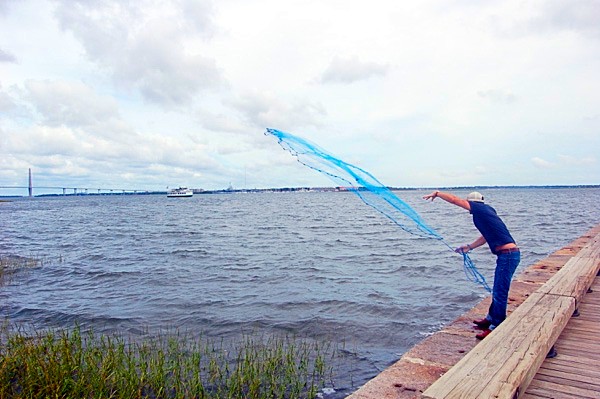