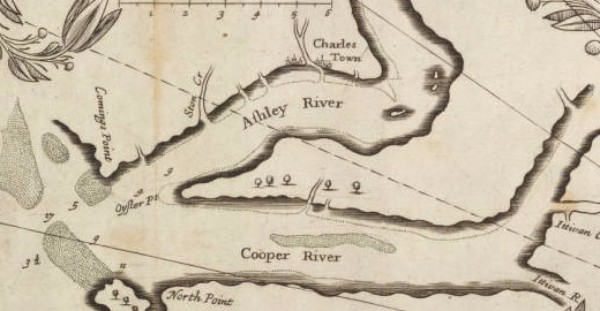 A new description of Carolina by the order of the Lords Proprietors. From http://www2.lib.unc.edu/dc/ncmaps/

Y’all probably know that Charleston’s original colonial settlement was not on the peninsula, but about three miles up the Ashley, right? Yep, the very same site on the bend of the river that is now the popular state historic site Charles Towne Landing. If you haven’t been since it was revamped, you absolutely need to go. Charles Towne Landing is an interpretive history site where you can get a glimpse of life in a 1670 colony--costumed rangers, fortifications, crop gardens, a native animal forest, a 17th century cargo vessel replica and archaeological investigations. Take a picnic, rent some bikes and explore this gorgeous 200-acre former plantation site, which is probably one of the most important investments the City ever made. But do you know the story of how Charles Towne Landing came to be? Well, believe it or not, it all started with a birthday party.

In anticipation of the 300th anniversary of Charleston’s settlement, the City purchased the land once known as Old Town Plantation, the ancestral property of Ferdinanda Legare Waring, from her and her husband, Joseph Loor Waring. At the time, the site of the original settlement was purchased for the express purpose of creating an installation to celebrate Charleston’s Tricentennial. But when then-Governor Robert McNair established the Tricentennial Commission, it was for South Carolina’s Tricentennial--in other words, we had to share the glory and the funding with the rest of the state. Needless to say, there were some grumblings going on about that.

Artist's rendering of the three Tricentennial Exposition Parks in (l to r) Charleston, Columbia and Greenville

The Tricentennial Commission was tasked with not only reflecting on the past, but celebrating the future. The “Tri” in Tricentennial inspired the incorporation of triangles into the architecture, which was to be modern in design and conceived by internationally famous designer, Sr. R. Buckminster Fuller. Three Exposition Parks were planned to reflect South Carolina’s first one hundred years separately: the Charles Towne Landing Exposition Park would be located at the first colony settlement and focus on the first century and colonial life; the Midlands Exposition park would be located in Columbia and focus on the second hundred years, from the American Revolution to just after the Civil War; and the Piedmont Exposition Park would be located in Greenville and focus on the last century, featuring the growth of industry in the state. This way, no one was stepping on anybody else’s toes and the entire state could benefit from the gazillions of tourists that would surely come to see these exhibits. So, everybody’s happy, right? 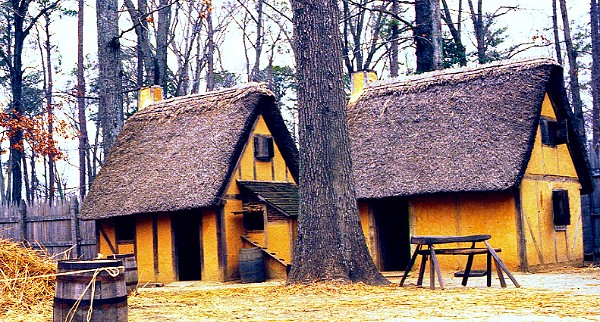 You may be surprised to read this, but ideas for the park’s concept and design proved to heat up and divide Charlestonians, as well as members of the Commission. First of all, there was the riff about what exactly should be developed at Old Town in the first place. Since there was no village left to restore, many locals thought that a Jamestown-style reconstruction would be most informative. And local artist Emmett Robinson drew plans for the village, but these were strictly conjectural--there were no plats or photographs to inform the study, and even the architectural explorations had rendered insufficient information for an authentic recreation. Purists feared a Disneyland-like display and felt that if Old Town could not have the real thing, it should have nothing at all. Opponents countered that there were already three old plantation gardens right up the road, and that this site should offer something different that was stimulating and educational. Alas, this idea was bantered around until it was too late to try to construct something before the looming April, 1970 deadline, so the Old Town Village was scrapped for the time being.

The Pavilion and The Adventure at Charles Towne Landing, 1970

The Exposition Hall was another source of contention. When a rendering of the modernistic plan was published a year before the planned opening, Charlestonians squashed it. One person commented, “I think this is atrocious. Apparently the architects have never taken a good look at what exists in Charleston. This would look fine in Squedunk, Iowa, but not in Charleston.” So, the next set of plans revealed a “more fitting” open-air Pavilion that was 200 feet square, 35 feet high with a flat roof, surrounded by a 30 foot reflecting pool, or moat.

Well, the project continued to be fraught with problems. The site of the Pavilion was laid out to partially cover the site of a Kiawah Indian “great house.” Not ruins, mind you, but the placement of post holes were determined by changes in color and composition of the dirt. Five local residents sued the Commission to prevent building over the site, but it happened nonetheless. Then there were building problems with the roof, which was supposed to be supported by only four columns but in the end scaffolding and additional supports were added. Construction of the structure continued after the opening ceremonies on April 4, 1970 but it eventually opened to much celebration. Who remembers winding around the spiral walkway to the exhibit hall in the basement?

Over the years, memories of the fretful beginnings of Charles Towne Landing were laid to rest as residents and visitors alike enjoyed all that the park has to offer. The other Exposition sites did not enjoy such success. The geodesic structure in Greenville was never completed and was abandoned and destroyed. Columbia found that flanking a colonial mansion with two ultra-modern domes was not really a good idea; the domes were removed and one was brought to Charles Towne Landing as an event space (envision 1970s prom night).

Hugo badly damaged the structures, but it wasn’t until 2003-2005 that the contentious-cum-beloved structures were removed. Now there is a Visitor’s Center that is much more in keeping with the surrounding area, and it won a Carolopolis Award from the Preservation Society of Charleston. Again, if you haven’t been out there since the re-vamp, you need to go check it out! 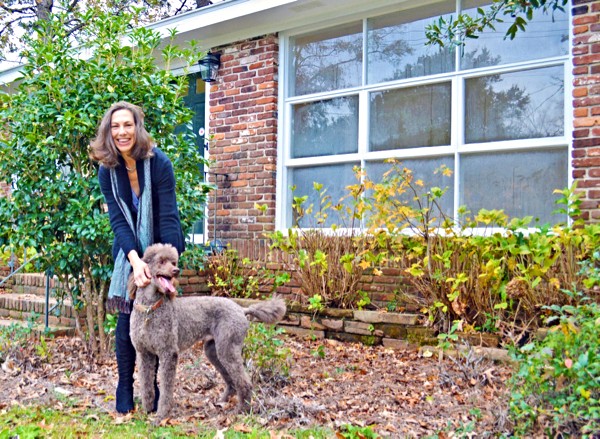 Author Susan Sully at her new home in Charlestown Terrace

Right next to Charles Town Landing is a subdivision called Charlestowne Terrace. Lois recently had the pleasure of helping author Susan Sully find the perfect house here. Since Susan is a well-known style writer, we thought you might like to hear her take on her new neighborhood and home.

I have been West of the Ashley many times, mostly to shop and visit friends in Byrnes Down and Riverland Terrace. But when I started looking for my own home in West Ashley, I visited many interesting neighborhoods that I had never seen before. I was particularly excited when I found Charlestowne Terrace. It is a beautiful mid-century suburb surrounded by the wilderness of old Charlestowne Landing. The neighborhood is populated with lovely brick homes ranging from colonial revival to the classic "ranch". I think that the term ranch is insufficient to describe the variety of one story brick homes. The landscape is robust with mature southern classics such as live oak trees with Spanish moss, magnolias, tea olives, camellias and azaleas. It’s the perfect blend of the old south and the new. This seems to be an undiscovered neighborhood tucked away from the busy streets of West Ashley.

A friend of mine, David Felde, who lives in the Park Cities of Dallas, where there are some of the prettiest mid century suburbs in the country, refers to his 1950's brick house as a "suburban cottage." David's house, built in the 1950's, is a major inspiration for my own suburban cottage and will be featured in my next book Past Present: Living with Heirlooms and Antiques.

David, who was a past editor of House Beautiful and Southern Accents, showed me how beautifully an eclectic collection of furniture can be shown to advantage in a mid century cottage. My own collection of furniture is not just eclectic, its eccentric. I tend to like strong pieces with a lot of character. When I found a suburban cottage in Charlestowne Terrace with an open floor plan, paneled walls and large windows I realized I had found the perfect home for my menagerie of possessions.